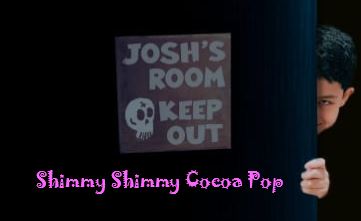 The 80’s themed Shimmy Shimmy Cocoa Pop is a fun packed hour that will be a trip down memory lane for many! Rate the Escapes review this playful escape room.

When Josh Baskin returned home after his “Big” adventure, he took more than he should, he took an exciting prototype toy from MacMillan Toys. You are the competition and you want that prototype! His bedroom – that must be where he’s hidden it. Can you find the toy and escape in 60 minutes?

Located in the small Northamptonshire town of Rushden is Esc Rushden, formerly Want to Escape Rushden. Easily reachable from Northampton, Milton Keynes and Wellingborough this venue is the only Escape Room in town and offers 4 games with very different themes.

We’d previously been thoroughly impressed with the TERPECA nominated “Guardians of the Gallery Room” and so were excited to return and see what their other games had to offer. As ever the team here are super welcoming and we were happy to spend some time with out host in the lobby discussing escape rooms in general and making the most of their EXTENSIVE experience to add some rooms to our hit list!

Introductions and chit chat over, we were led upstairs to the 1980’s!

Let’s start by saying its a long time since we have seen the movie Big, but immediately when anyone mentions the film there are certain things that spring to mind. First and foremost the 1980’s when this movie was filmed and set. When we entered this room there was no doubt that the spirit of this over the top and colourful decade was captured perfectly.

A was the sense of being in a child’s bedroom. Everything from the single bed covered with 80’s character bedding to the action figures dotted around the room was considered and captured the spirit of the movie this room is based on. We enjoyed looking around the room as there was a lot to take in across the walls, floor and ceiling. A kid’s bedroom is not the most organised of spaces and there was a kind of managed chaos in this game’s decor that made the room feel genuine. Being based in an older building, presumably a retail unit with housing upstairs, the venue itself also worked really well for the theme.

As the game evolved and we progressed into other stages of this escape room it was great to see the strength of immersion and theming was not lost. Sometimes, in an effort to offer new spaces, new areas can feel quite random but everything flowed very well and the new play areas felt as relevant as the first.

Of course, mention the movie Big and there is one iconic scene that everyone will remember. Without giving spoilers for those that can’t remember, we were thrilled to see that this did make an appearance in the game and really completed that tie in with the film. It was also a lot of fun to play! 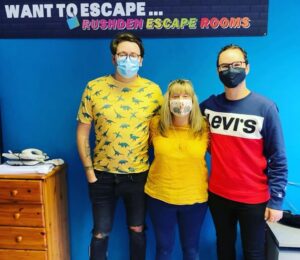 Where Guardians of the Gallery and Conspiracy are games that put a strong emphasis on complex puzzles and sophisticated immersion, Shimmy puts the emphasis on fun. Which makes total sense when you think that the room is set in a kid’s bedroom. That’s not to say that the quality of the puzzles was any less impressive, just that the mechanics and logic behind them were a little simpler and the solutions generally involved a bit of play.

As we scouted the room we came across clues that were amusing and both decade and theme appropriate. These were then used to solve logic, reasoning, memory and communication based puzzles that were all thoroughly enjoyable. We’d played similar puzzles previously but in this environment each had been adapted to feel novel and true to the source material.

There were some brilliant moments in this game where play was needed to complete a puzzle and obtain either a key or code. These made for some really memorable solutions to puzzles within the game and got us all moving about. The iconic scene from the movie being one of these moments (i’m sure we’re not the only team that were happy to sacrifice a few moments having a bit more fun with this than was needed).

One of the “play” or “skill” based puzzles was a bit more tricky, whilst we knew what needed to be done it took us a lot longer to actually complete! Some teams might find this a little frustrating and the team here did (at the time we played) actually offer to bypass this if we tried and failed more than was enjoyable. We persevered and actually made a bit of a game out of this by taking it in turns to try and solve! When we finally did we weren’t too bothered to have used up a lot of our time because we’d been able to enjoy “playing” the room.

It’s been clear to us on every visit to Esc Rushden that the team behind these games and the GMs are all escape enthusiasts. We’ve also seen their names pop up on leader boards around the country when we’ve played other games. The team could not be more welcoming and accommodating – accepting last minute bookings over the phone and enjoying a good chat about the rooms we and they had played.

Our GM for this visit outlined the premise of the scenario and escorted us to the room with as much information as we needed to get going. Once inside the clues were delivered through the screens which showed the amount of time remaining. Every time a clue was delivered there was a “Shimmy Shimmy Cocoa Pop” to alert us that we’d received a hint.

Hints were not too free flowing and when they were received gave headline information only, to still give us a chance to solve the puzzle on our own. We were asked ahead of playing if we wanted to receive lots of guidance, or be left mostly to solve things on our own.

An hour escaping Shimmy Shimmy Cocoa Pop set us back £25 per person which is about the standard sort of price we would expect to play for an escape room in the local area. The price for 2 or 3 players is the same but discounts are available if there are more than 4 players up to 7 players where the cost is £18 per person. These prices are during the venues Peak which is Friday post 4pm and weekends.

Playing outside of peak the rates are actually really good with a game costing £22 for 2/3 and just £16 for 6 or more players. This is very competitive and great value for money.

Outside of this peak/off peak cost, Esc Rushden also offer seasonal discounts through their instagram channels such as kids playing free in half term. The venue also has a private car park which offers free parking for players.

Shimmy Shimmy Cocoa Pop is not the most challenging or even immersive room we have ever played. But when you have a room like Guardians of the Gallery on site thats not what a venue like Escape Rushden needs. This game is all about the fun and the brains behind this game clearly had a blast building the room, delivering a game that is playful, energetic and most importantly enjoyable.

This game was beautifully simple whilst at the same time being pretty challenging meaning that its one we’d recommend for both adult players and families. For players looking for more of a challenge its definitely worth checking out Guardians of the Gallery and Conspiracy. These are on site also and offer a totally different experience. We had a brilliant time in Rushden!