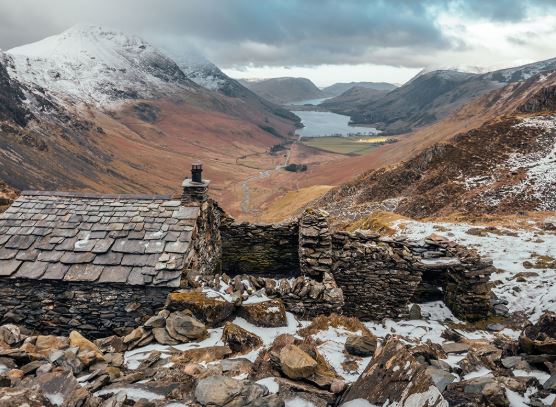 We took on the Arctic Survival Escape room in Aylesbury and achieved our first Rate The Escapes leaderboard entry! See what we thought of this challenging room!

You are lost in winter wastelands and have stumbled across an old abandoned stone house. Your only hope is to find and repair a communicator to call for help – you have only an hour to survive.

Vire may not currently operate to the same scale as some of the bigger escape room brands such as Trapp’d and Escape Hunt, but in the home counties they currently operate four sites on high street locations with a variety of rooms on offer at each branch. We took the short drive down to Aylesbury to check out the Arctic Survival Escape Room located just off of the main street in the centre of town.

Believe it or not this isn’t the first Arctic Escape room we have played, the first being the 46 Below room by Trapp’d. Comparing the two rooms, Arctic Survival definitely offers a more intimate game (46 Below saw us traversing a plane wreck in the Arctic) with gameplay focused entirely inside a hut where your mission is to establish communication with your would-be rescuers.

The cabin is a reasonable sized room decorated with stone effect wallpaper and kitted out with wooden floorboards. Fire wood is scattered around the room and there are lanterns fitted to the ceiling. When the room is in play these become the only light source and every ten minutes one lantern will go off making the room darker as the game progresses. We enjoyed this as it added a sense of urgency to our gameplay and was the only way we knew how much time we had remaining at a glance. We observed a large mantle in one corner and a small folding table in the other. While it does come across as a survival hut, it’s fair to say it didn’t hit us with the wow factor. It is definitely a more budget take on the Arctic theme than we have seen before. Thing is, we don’t think this room is badly executed at all, it just needs a few extra items of furniture and props to take it to the next level and make it more convincing. Perhaps panelling the walls would work better than wallpaper.

The ending of the room is perhaps a little too immersive as when we escaped we actually thought the game was still going and we had uncovered another room. In reality we were in the cloakroom!

Our mission in the Arctic Survival room was to piece together a radio so that we could establish communication with our rescuers who had an hours worth of fuel. The different parts of the radio were scattered around the old cabin and we would have to solve a series of puzzles to locate them and place them on the wall.

Arctic Survival is described as the hardest room that Vire have to offer at their Aylesbury branch and it is fair to say that we did find ourselves challenged in completing this room. There are actually not a huge number of puzzles inside the game, but rather a small series of more difficult problems to solve. In hindsight, these puzzles at their core are not all together that difficult. However, we found that the framing of the tasks, and sometimes a lack of prompts around the room to guide us made them more difficult than they really were. Ultimately this meant we spent a lot longer solving puzzles than we would have done normally.

Ambiguity aside, there are some really clever challenges in this room. Although we needed an initial clue to figure it out, we loved how the code to one of the locks was deciphered and had never played that particular puzzle before. There was use of items that in any other room we would discard which were actually quite important to the game (and the theme if we’re thinking back to immersion and being trapped in the cold Arctic). Alongside the traditional lock and key puzzles there were skill based tasks which again, we haven’t played before and really enjoyed in the room. We also liked the darkness of the room, not only did this tie in nicely with the theme but it made some of the easier puzzles challenging too.

We can’t imagine many teams complete the game without clues, particularly on some of the more niche puzzles that involve things you would normally leave alone in an escape room. In addition, one quite difficult task occupied a lot of our time firstly because we tried to use it too early, and secondly because we had to wait for our cue to periodically make an appearance. Another task took longer than needed because the clue was hand written and almost ineligible. It did feel a little bit more difficult than it should have been.

That being said, we were thrilled to escape the room and learn that we had achieved the room record of 48 minutes tied with another group. 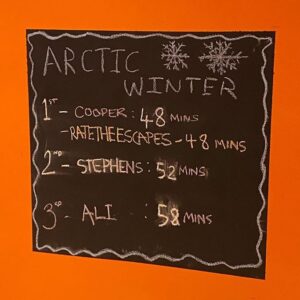 We struggled to book with Vire using their website as we were trying to secure a same day booking. If you’re doing the same we really recommend giving them a call as they were very helpful and able to get us booked in later that day. As luck would have it we then needed to delay our booking by a couple days with just an hours notice. We got through to the manager using Facebook Messenger and they were really happy to accommodate.

As if we hadn’t been annoying enough we then arrived late due to traffic but again the team were super helpful and we were greeted at the door, seated and sanitized before being shown to our room by a team (yes a team) of games masters. They explained some of the more unique elements of the room such as the lights dimming and the need for torches etc.

Once locked inside, clues were delivered via a walkie talkie on request, though the games masters would step in to help us out if we needed. There were probably some moments where it was fairly clear we were never going to get the right solution and thankfully they spotted these without stepping in too early when we didn’t need the help. For the times where we did need a nudge, the comms through the walkie talkie were brief and subtle meaning we still had to work to find the end solution. On finishing the room one of the guys was on hand to answer any questions and put our name up on the leaderboard (very proud moment). 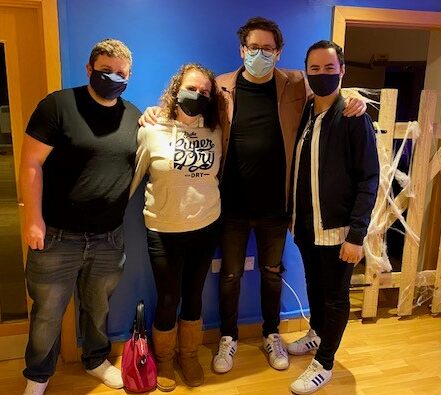 Vire is probably one of the cheaper rooms we have played in our home county and it worked out at just £18 a head for four of us to play Arctic Survival, thats a bargain as far as we’re concerned. In fact, if the team here added a little more to the room we’d have happily paid a bit more.

Arctic Survival isn’t going to be rated as one of the best escape rooms we have ever completed, but that is not to say it didn’t provide us with an enjoyable hour. The theme could be executed a little better, but the general idea was there. The challenges could be executed a little better, but there were moments of brilliance. Had this been our first room, we would have struggled but we would want to play more. Instead this was room number 45 and so we are probably a harsher critic than most.

Bearing everything in mind, we enjoyed our time here enough to play their other rooms and are looking forward to seeing what Space Race, Virus and Haunted House have to offer.