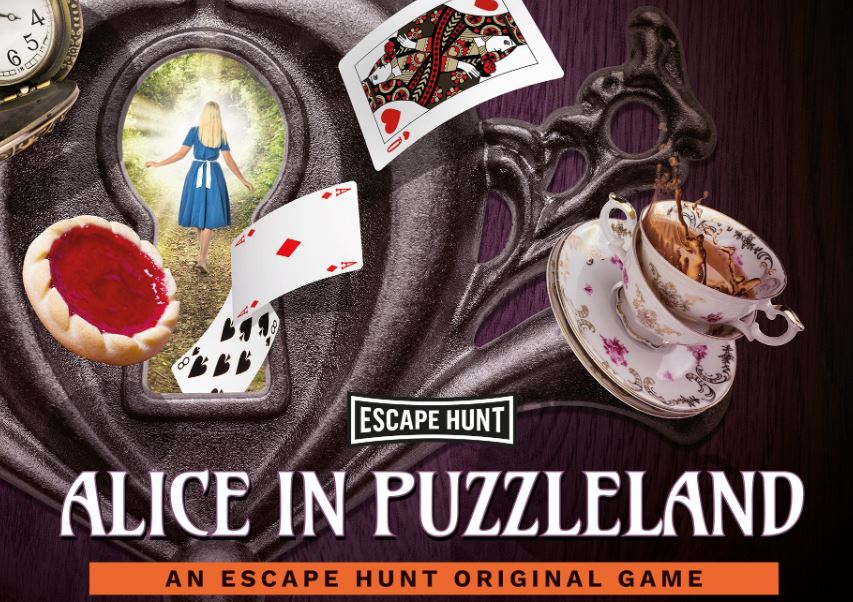 We headed down to Puzzleland via Oxford to help save the Mad Hatter from Execution! Sinister stuff! See if we managed to find the Queen’s Tarts and what we thought about our Alice in Wonderland themed experience.

The Mad Hatter is in trouble. Save him from the Queen of Hearts without losing your heads.
Step into Wonderland, where the Hatter has been accused of stealing the Queen’s Tarts. With Alice nowhere to be seen, it’s time for you to fill her shoes.

You find yourself at the Hatter’s cottage. The table is set but no one is around.

A sign on the lawn reads ‘Tea Party Cancelled by Royal Decree’. Curiouser and curiouser…

Find and return the Queen’s Tarts in 60 minutes, or it’s off with the Hatter’s head. Chop chop.

As we explained in our review of Blackbeard’s Treasure, Escape Hunt Oxford offers a very smooth experience from start to finish. With well rehearsed room briefs and games masters who double up as actors at certain points, they clearly take immersion very seriously. We were quite excited by the idea of an Alice in Wonderland themed room and that’s actually what prompted us to make the trip as it’s a theme we have never seen anywhere else. We’ve seen the fantasy and sci-fi rooms, but Wonderland is typically though to be quite quirky and so we thought this would make for some interesting elements in an escape room.

When we entered the room we found ourselves in the Mad Hatters front garden, where a small dining table was prepared for the Queen’s party. A large street sign occupies the middle of the room and we observed plenty of nods to the Wonderland theme such as roses, the suits of cards and clocks. What grabbed our attention though was the large cottage at the back of the room which is complete with a small fenced garden, flowers, net curtains, locked doors and a little postbox. It was very fairytale and if we were to picture what the Mad Hatter’s house might look like, this would definitely be it. We felt it wouldn’t look out of place in the queue of a kids rollercoaster at Alton Towers.

Thankfully, solving a few puzzles eventually led us inside the cottage and into the Hatter’s kitchen. As with the outside, this room was just as immersive as the garden and the original theme was well maintained moving from the one location into the next. The kitchen was kitted out with a stove, french dresser and recipe books but also featured several nods to the Alice theme such as tiny doors dotted around the walls and more crazy clocks. It is very well executed and as a theme, we were very impressed.

If we had to be constructive, we did find a few areas where the room is showing a few signs of wear. There was a fairly key light fixture that wasn’t working, some of the crockery on the dining table was chipped or cracked and we also observed some nails poking out of a wall near the door (but behind a prop so not dangerous). To be clear though, this didn’t take away from what has been achieved in the room.

This was a new mission brief for us, our task was not to escape but to find some missing cakes in time to stop the mad hatter losing his head! In typical Escape Hunt style, padlocks are noticeable absent in this game. In fact, we only used one key to our knowledge in the entire game. Instead most of the tasks involved object manipulation or placement based on visual clues we spotted around the room which then leads to an area or object opening up electronically.

The game began in the hatters front garden and we quickly got to work scouring the room for clues, which were hidden in various places and sometimes very much in plain site. There were two main challenges we would have to complete to advance. One involved a fairly obvious object in the room and a visual clue while the second was much more linked to the Story of Alice in Wonderland. We had to hold back singing a song from the film while we got to work. For those less familiar with the film or book, there are instructions in the room so although it might help to know a little bit about the story, its not essential. This particular task was very cleverly executed and offered a puzzle we have never played before. Although sadly, this is where one of the light fixtures failed to work for us!

Successfully inside the cottage, our mission now turns to finding the missing tarts and putting them on table before the Queen executes the hatter! Doing so we had to complete more object manipulation but finding the objects became a bit more challenging. Items were hidden behind cupboards and draws which could only be opened after clues were solved. The game definitely became more linear in the second half but there were still a few points where we were all working on something at the same time. Some of the tasks were easier with a few heads rather than one! As with the garden, there are some really interesting tasks in this part of the game, which all tie back to Alice.

There wasn’t much we didn’t like about the puzzles but we did think of a few things that could be improved slightly. Outside of a technical glitch, some elements are not signposted so clearly. One task involved placing objects in a particular order but there was no obvious start point. Most clues were physical items but one was not, and this meant we overlooked it without a prompt. Finally, because of the electronic nature of the game, some clues only “activate” at a certain point. We had discarded these earlier because it appeared to do nothing. When it was needed there was no sign to indicate anything had changed. One clue involving cards we’re pretty sure we only got the last placement right down to guesswork!

As with our other Escape Hunt experience, we didn’t actually meet our games master but instead the young girl at reception who went through the safety features and then very quickly and unexpectedly transformed into an extravagant citizen of Wonderland who outlined the scenario. The games master who guided us through the game was unseen through our whole experience and probably sat at a computer in the back guiding us through the room and activating hints when we asked for them.

Hints in Puzzleland are requested by ringing a bell on the dining table that summons the Cheshire Cat. The hint is likely a pre-recorded message in the first instance but further hints we thought were customised to us so might have been given there and then in character. As a concept in keeping with the theme it generally worked quite well. All players were able to hear the hint which we have always preferred. Hints were delivered promptly and clearly and from what we could tell gradually increase in their directness if you repeatedly ask for them on the same puzzle.

In the centre of Oxford, on the top floor of a nice new modern shopping centre and in what we can only imagine is a very expensive retail unit and yet still only £25. Obviously the scale of the Escape Hunt operation gives them an advantage here! Regardless though, it’s a very fair price for an enjoyable experience. Booking a second room on the same day triggers a 10% discount too. We were able to use this offer to play Blackbeard’s treasure later in the day.

Families with children will have a great time playing this game, the mix of challenging riddles with physical based solutions means there are roles for kids and adults to play in solving this game. Having said that, we as a group of three thirtysomethings also really enjoyed the room and adult only groups shouldn’t be put off by the theme. As with Fourth Samurai and Blackbeard’s Treasure, all elements of the game were considered and true to the storyline offering almost total immersion. 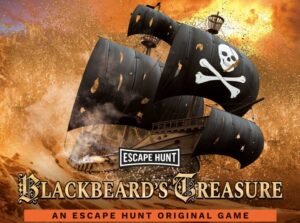