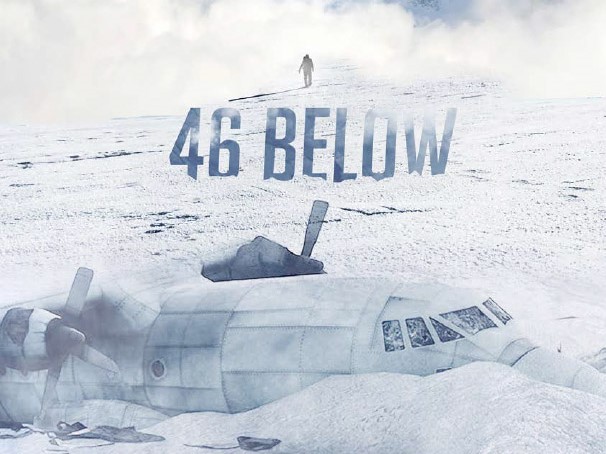 46 Below saw our plane crash in the arctic and had us searching for a means of communicating with rescuers at Billing Aquadrome. See how we got on.

After years of dreaming, you have finally booked your Arctic Adventure! Clambering onto the plane, you place your hand luggage into the overhead space and settle down into your seat. Your route passes over the Borean Rectangle and it’s confirmed that 117 planes have mysteriously vanished over this area. Unsurprisingly, the plane experiences a fair amount of turbulence along the way, but nothing too troubling. You are asleep for a solid 10 hours before a large jolt startles you. You look around, the other passengers felt it too and are looking around rather alarmed.

Suddenly, the oxygen masks drop from above you and lands conveniently in front of your face. You know you are rocketing toward the ground and the collision will be unrelenting. You desperately fumble with the oxygen mask and just when you move the last wire out of the way, there is a deafening explosion… Black.

When you awake, your limbs are almost frozen numb. The plane is but a crumpled wreck in the snow and bodies surround you… no signs of life anywhere. The blizzard is thick and the cold is bitter to the bone. Survival is the only thing on your mind right

now… figure out a way to establish communication and signal for help, but first you must find out where exactly you have landed… Hurry, before hypothermia begins to set in and your very life escapes you!

If you have never been to Billing Aquadrome before, its a fairly unique place. It’s a sprawling caravan site with a leisure centre, theme park, railway and large central lake. There are on site pubs and loads of open spaces. It’s definitely the sort of place you visited as a kid in the 90’s when you went to the seaside and it hasn’t changed much in the last 20 years. The surprising thing is, this place is in central Northamptonshire, and rather than crashing waves, your more likely to hear the sound of the M1. Tucked away at the back of this site, just behind the big ferris wheel, is Trapp’d Billing.

We had been to Billing before, and so it’s fair to say when we learned they had an escape room onsite, we were expecting a basic room at best. Having read the (extremely) comprehensive back story online, we couldn’t help but be sceptical that anyone could pull off a convincing Arctic plane crash room, let alone in Billing. Waiting for the inevitable disappointment… we were taken to the room.

Wow… We were in the Arctic. Well, we were still in Billing but they’ve only gone and pulled off the polar feel. As the game starts, the first thing we have to appreciate is the scale of this room. Its HUGE. It’s also cold. The air con was whacked up and it really convincingly (but not uncomfortably) gave a sense of being in the arctic. As did the fake snow, we’ve never been in a room with that before! In fact the only thing that gave the theme up a little was the ceiling. Ordinarily, its a bit harsh to rate the ceiling, but the game here brings you pretty close to it.

Polar theme successful, lets talk about the plane crash. It’s definitely there, but a bit less convincingly than the arctic. We would have liked to see more rubble and debris. One row of chairs, some scattered clothes and bags give some sense of disaster, but a little more would go a long way to stop the room feeling sparse. A large section of plane wreckage site to one side of the room, and whilst impressive from the outside, when the game takes you inside, the MDF is unpainted and the illusion lost a little. Overall however, we still agree that this is an impressive theme and on the whole, successfully immerses you in the story.

The format of 46 Below is linear in the sense that one clue leads to another and challenges have a clear order, but it does still offer players a variety of different tasks within that flow. There was nothing revolutionary for those who have played a lot of rooms but every puzzle did have a slight spin that tied it back to the relevance of the room. The guys here definitely make the most of the space, and physicality is a very big part of the room. You’ll be running around exploring every corner.

We didn’t get off to the best start, completely overlooking a very big part of the game by assuming it was disguising some sort of electrical cupboard. It wasn’t, and we wasted a good five minutes aimlessly trying to put things together that weren’t needed at the beginning. Once located, the task was simple enough in theory, but the location was quite restrictive which meant again, we spent longer here than we would have liked. What follows is a series of challenges that will force you to journey around the room and use both observation and logic in order to unlock a fair amount of padlocks. Warning – the directional padlock does make an appearance! We found nothing overly difficult, but nothing was too easy either.

We were failed by tech a little in the room, nothing too advanced but our torch would turn off after five seconds of blinking. We hope this wasn’t intentional as it made for quite a tedious five minutes solving one puzzle in intermittent darkness.

When we booked this room, we were pretty impressed with the descriptive backstory online. When we got to the venue, the welcome was friendly enough, but there was no recap or summary of the story to set the scene one last time before going in. This didn’t bother us too much as we had both read the story. If however, you had booked the room for your group and not everyone had read the plot, you might be a little lost.

Clues inside the room were delivered via a loudspeaker or tannoy system. Our games master delivered these when she saw we were getting a little stuck (or in our case completely missing a puzzle). We like this approach as everyone can listen to the clue and there’s no risk of misinterpretation when the message is passed on. For the most part, it works well in 46 below, but there was one area of the room where we couldn’t hear clearly. Another speaker in this area would make a big difference.

£20 per person is at the lower end of the price scale for a good escape room, especially one that pulls off immersion as strongly as 46 below. Trapp’d also offer regular codes and promotions which can make the game even more affordable for families and larger groups. Within the Billing Aquadrome resort itself, this may be one of the cheaper ways to keep the family entertained for 60 minutes.

We had a great time playing this room. Not least because we’d never played an arctic room before and so were immersed in a theme that was totally new to us. While the plane could be finessed a little better, the overall effect is there and has to be appreciated. The challenges, while linear and at times a little flawed by their location, are still fun overall and made for an enjoyable hour.